From rubbish to revitalised in Raunds 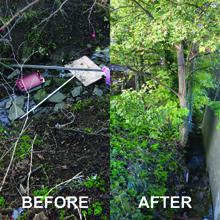 A Raunds alleyway blighted by litter, anti social behaviour and fly-tipping has been given a new lease of life thanks to the efforts of East Northamptonshire Council, Raunds Town Council, Service Six and the Probation Service.

The alley runs from Ponds Close to Raunds High Street and over the years has suffered from environmental crime which has made it a neglected and scruffy part of the town.

The enviro-crime issues have been tackled by a team led by East Northamptonshire Council to improve the look of the alley and prevent future damage. Service Six worked with local youths to divert them away from the alley and into other organised activities, the Probation Service has cleared the watercourse and banks of litter and debris and new signage stating the consequences of fly-tipping has led to a drop in dumping. The council’s street cleansing contractor Kier, removed all the waste cleared from the alley and the town council and district council have worked together to fence off the watercourse to prevent further illegal dumping and pollution.

Ward councillor, Tony Boto said: “Previously the alley was in a dreadful state but by working together, the envirocrime team has made a great improvement.

“With the help of our local communities, we want to stop litter, fly-tipping and graffiti from happening in the first place.  Hopefully, now the area is looking better, people will have more incentive to keep it that way.”

Find out more about the I Love East Northants – Improving where you live, work and play campaign by visiting our Envirocrime webpage.

Feeds from the Web